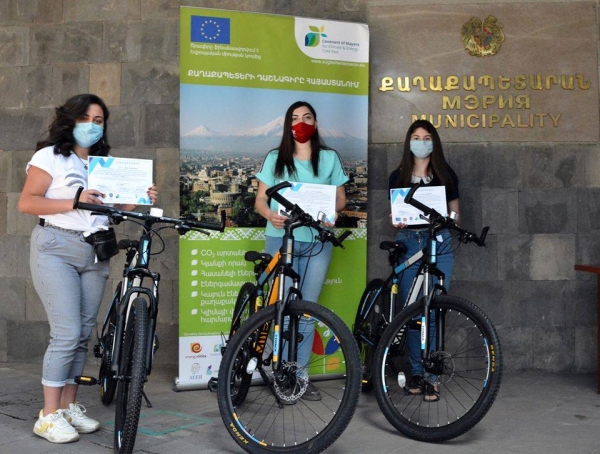 During the EU Sustainable Energy Week (EUSEW2020) CoM East project in cooperation with the Union of Communities of Armenia announced "Green and sustainable growth" photo (selfie) contest for teenagers representing the Covenant signatories in Armenia.

The contest was attended by more than 150 young people and teenagers representing not only the Covenant signatory communities in Armenia, but also from other Armenian communities.

On July 3 the winners of the photo contest ''Green and sustainable growth", organized by the “CoM East” project and Union of Communities of Armenia were determined.

The names of the winners are:

On August 5 in Gavar was held the awarding ceremony. The winner of photo contest from Gavar Emma Vanetsyan received bicycle from the CoM East project and Union of Communities of Armenia.

In Sevan Mariam Mkrtchyan was awarded. She received a photo camera. The ceremony was welcomed by the mayor of Sevan Sargis Muradyan.

On August 10 the awarding ceremony was held in Ejmiatsin. The winner from Ejmiatsin city Siranush Gevorgyan received camera and certificate of participation in the photo contest.

Only during the awarding ceremonies the outreach of audience in social media - on the Facebook pages of the Covenant of Mayors East and Union of Communities of Armenia, exceeded 15 000 people.